Double side band with carrier 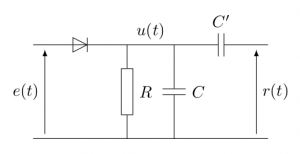 Expression of a frequency modulated signal is given by:

Spectrum for general signal is usually unknown unless for very simple cases.