The objective of this lab is to study the effect of the analog to digital conversion. All the exercises can to be done with Matlab or Octave (which is a free software and has the same syntax as Matlab). The preparation part has to be done before the labs. A single lab report has to be done for each group and have to be sent 3 weeks after the end of the last lab.

Nowadays, most of the signal processing techniques are done in the digital domain. However, sensors still produce analog signals which need to be converted into the digital domain to benefits from these complex signal processing techniques. Also, this trend is clearly rising since integrated circuit are characterized by constant increase in performance and cost reduction.

The conversion in between the analog domain into the digital domain is done with an Analog to Digital Converter (ADC). This conversion implies 2 different steps:

The objective of this lab is to characterize the performance of this conversion and to introduce methods which allow to see the trade off and improvements in between to 2 operations. 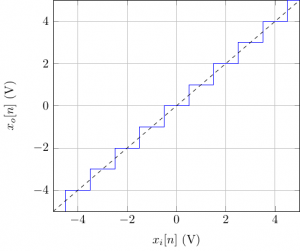 We consider, in the following, that the quantization is done using rounding method. Fig. 1 presents the relation which links the (continuous) input amplitude

and the (discrete) output values

is defined as the maximal variation of the input which do not produce a change in the output. Also, note that the function presented in Fig.1 is not a bijection since multiple input

values has the same output value

. A direct consequence is that it is impossible to reconstruct the continuous input signal form the discrete output signal. Thus this process introduces a quantization error

and is defined as the difference between the continuous value

and the discrete value

Note that, at given sample time

is a random variable.

bits using rounding with a full scale of

Start Matlab or Octave, these 2 software accept commands which can be directly entered at the prompt, or placed inside a script (an external file with an extension .m) in the working directory. Function can also be placed inside a file (whose name is identical to the function and with an extension .m, see below for an example). For each command, detailed prototype is described in the (online) manual.

In the following, we note

the signal sampled at

the signal sampled at

The objective of this part is to characterize the performance degradation which is classically achieved when a signal is oversampled. For this, a new version of

should be constructed from

We consider the three different systems presented in Fig. 2. The first one corresponds to quantization over 8 bits at a frequency

, the second one is identical except that the sampling frequency is

. The last one is different since a digital filter have been added after the quantization.

In the previous section, we have seen that performance can be increased by increasing the sampling frequency and using a (carefully designed) digital filter. In this section, we will see that the performance can also be increased by modifying the power spectral density of the quantization noise. We consider the system presented in Fig. 3. Note that after Failed to parse (MathML with SVG or PNG fallback (recommended for modern browsers and accessibility tools): Invalid response ("Math extension cannot connect to Restbase.") from server "https://en.wikipedia.org/api/rest_v1/":): {\displaystyle H(f)} , digital signal is usually down sampled to a lower frequency, as we have seen earlier, this operation do not modify the signal to noise ratio.

This system has the propertie to process the signal and the noise differently using 2 different transfer functions.

All the techniques presented in this lab are implemented and used in Delta Sigma ADC to increase the performance of the conversion where simple 1 bit ADC can produce more than 18 effective bits (and an oversampling ration of 64). Due to the limited speed of conversion, all these technique are only applied on low bandwidth signals (mostly audio).