This course is separated into 2 parts. The first one deals will SoC design and programming and is supervised by David Hély. The second one is focused on the SIMD extension present inside ARM architecture. The goal of this lab is implement and develop algorithms (functions) optimized for the NEON extension included in the architecture ARMv7-A et ARMv7-R. Slides of the course can be found here. This course requires the basic knowledge of a micro-controller architecture and classical C programming. Processing will run over a Xilinx Zynq 7000 SoC which contain an ARM Cortex A9 MP Core. Performance of the NEON engine will be compared to the performance of classical implementation (C function executed on the ARM core). 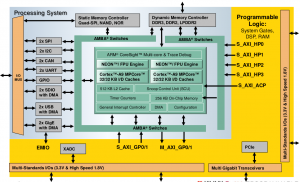 A lot of peripherals generate (or accept) data whose the size is smaller than the processor register size (e.g., 16 bits ADC and 32 bits processor.) When the CPU process these data, a single data is used at a time and processor register is not used fully which imply that the efficiency of the system is decreased. SIMD technology uses a single instruction to realize the same operation on multiple data (in the same time) which increase the execution speed.

During this lab, we will use the development board Zybo. This board include a Zynq 7000 System on Chip. This Soc is composed of FPGA and a Cortex A9 MP Core. Each core include one NEON engine. Figure 1 presents the system architecture. The four first exercises evaluate the performance of simple processing algorithms without any operating system (baremetal or standalone). The final exercise use the NEON extension in a Linux environment.

In this first exercise, we will develop, build, and run a simple application on the Zybo board.

init_platform() function is defined in platform.c file and permit to activate cache memory on the Cortex A9 MP Core. This function call is not mandatory. printf() allows to send the argument on the UART of the Zynq 7000. This function also supports the classical formatting of numbers.

If the building process is successful, the executable file main.elf is generated. If the process fails, errors located in the source files (or Makefile) have to be corrected.

Until now, we have successfully built our first application. The following steps allow to transfer the executable file into the memory of the Zynq 7000 and to run the program:

Finally, switch on the SW4 switch (LD11 diode should be on).

The function ps7_init() permits to activate the clock, the memory controller, and the peripherals (UART). This function have to be called before writing to the memory.

and observe the results on the serial port.

Programming using NEON is not straight forward and many implementations can be evaluated. In order to compare the performance in between different possible implementations, timming has to be used to accurately estimate the execution time of a given section of code. The Zynq 7000 provides a real-time timer which can be controlled using the Xilinx library. This timer is incremented at a rate which is 2 time lower that the Cortex A9 clock frequency.

Sum of an array

Locate the NEON instructions and compare them to the ones in neon.c.

We consider the multiplication of 2 matrices

of dimension 4x4 into a third matrix 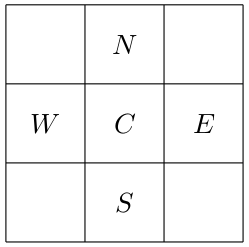 , we can compute the quantity

can be viewed as an approximation of the magnitude of the gradient.

is higher than a threshold value, then an edge is detected (and we store a 1 in the output array). If

is lower than the threshold value, a 0 has to be placed inside the output array. 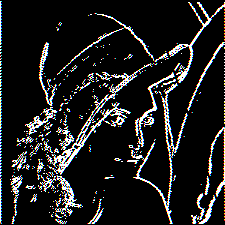 The objective of this part is to start a Linux distribution on the Zybo development board and to evaluate the performance of our edge detection application on a bitmap image. Several distribution are available to run over Zynq 7000 SoC. Some of them provide a file system only in the RAM. Some others can use the file system from an external flash memory (SD card). Linaro distribution is a Ubuntu based distribution and provide the same tools than a desktop distribution (graphical user interface). Before doing the following operations, check that the Zybo board is switch off. Also, this exercise can be realize with a Raspberry Pi 2 or 3 (rpi.zip).

At the end of these labs, you should now be able to develop, build, and optimize an application using the NEON engine present in Cortex-A processors.