Difference between revisions of "Differential RCS"

Differential RCS (or delta RCS) characterizes the aptitude of a tag to modulate the backscattered power. This parameter is has been introduced by P. Nikitin for UHF tags [1] and is classically estimated based on the variation of the IQ channels of the two states of the chip in the time domain. This quantity can however be generalized for any modulating tag in the frequency domain. The frequency definition remains compatible to the time definition. Finally, this new definition allows to estimate the delta RCS of any tag accurately using a simple spectrum analyzer. 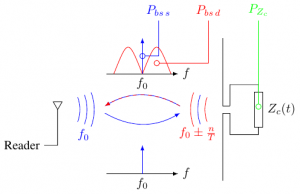 Fig. 1: Power spectral density of the signal backscattered by a modulating tag in the frequency domain.

Details have been presented in [2] and can be seen as a complementary definition compared to the time definition. The basic idea relies on the decomposition of the RCS

into a static RCS

and a dynamic RCS

and to pass into the frequency domain. Fig. 1 presents the main result where the (total) backscattered signal by the modulating UHF tag can be decomposed into 2 parts. Component located at

whereas component located around

Also, this frequency definition (as the original definition) is not limited to RFID tags and can be applied to any linear time-varying system such as rotating tags, moving tag and (surprisingly) barcodes. Another consequence is that linear time-invariant systems, are characterized by a delta RCS of 0.

At 915 MHz, this equation predicts a maximal delta RCS for passive (i.e.,

This quantity is generally sightly lower than the previous case but allows one to increase the data rate and/or the spectral efficiency.

are the first kind Bessel function of order

is the RCS of the dipole. Note that in this case variation of the backscattered power is continuous.

For a short-circuited half-wavelength dipole at 915 MHz, rotating at a distance of

) which outperforms any UHF tag.

rotating in a plan which is normal to propagation vector and impinged by a vertical plane wave, the delta RCS of this rotating dipole can simply be expressed as:

Note that the delta RCS is the same whatever the polarization of the reader antenna.

For a short-circuited half-wavelength dipole at 915 MHz, rotating in the previously described configuration, delta RCS is equal to -19.4 dBsm (115 cm

which can be directly estimated by any spectrum analyzer. Delta RCS can finally be expressed as:

is the span of the instrument and

a constant allowing to remove the static contribution generated by the tag (and the environment).